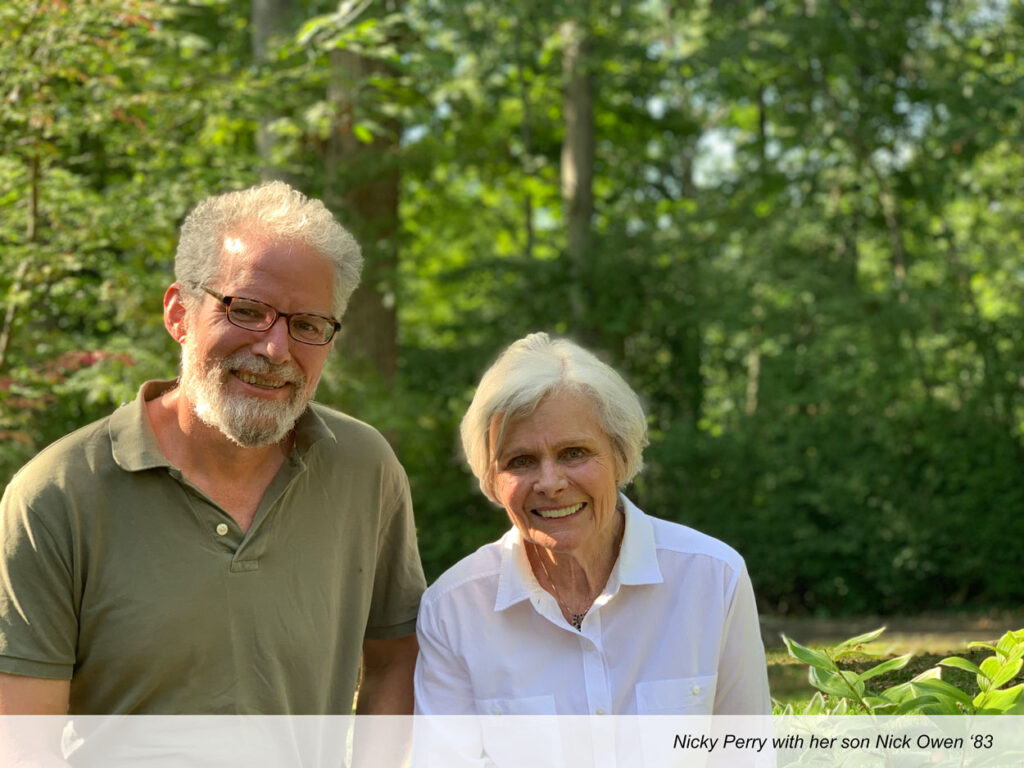 Nicky Perry P’83 GP’19 ’20 has remained an active member of our community since the late seventies. Thirty-nine years after her son Nick Owen ’83 attended Episcopal, she most remembers how the School let him be himself, especially when he would show up to Family Weekends wearing Hawaiian shirts and bolo ties — which were still technically in dress code according to him.

Owen was always one to push the boundaries good-naturedly, and Episcopal teachers helped him thrive — with a lot of laughs along the way. The School did the same for her two grandchildren, Jane ’19 and Mitch ’20, who were two very different students with varied interests from orchestra to athletics. “Episcopal accommodated all of them in wonderful ways,” Perry remembered fondly.

A graduate of an all-girls boarding school, Garrison Forest School in Maryland, Perry has long known the power of a residential life experience, and she remains invested in both schools’ futures. “The most important thing we can do as parents and guardians is educate our children,” according to Perry. “I wanted my son and grandchildren to have the best education they could get.”

Perry spoke of longtime Latin and Greek teacher Jeff Streed, who taught her son and grandson almost 40 years apart and retired at the end of the 2021-22 school year. “I think that’s proof of what a good atmosphere there is at Episcopal,” she said about Streed’s storied tenure and the influence one teacher could have on two students so many years apart.

As a member of The Bell Society, comprising individuals who have named Episcopal in their planned giving, Perry remains loyal to the School her son and grandchildren love so much. Over the years, she has hosted her grandchildren’s friends at her home in Upperville, Va.; attended many athletic events; and cheered in the audience as a proud grandmother. The thing that sets Episcopal apart the most in her eyes? “The sheer kindness of everyone on campus — from the students to the faculty to the staff. What they did for my family and me was just wonderful,” she said in closing.

“What they [the Episcopal community] did for my family and me was just wonderful.”