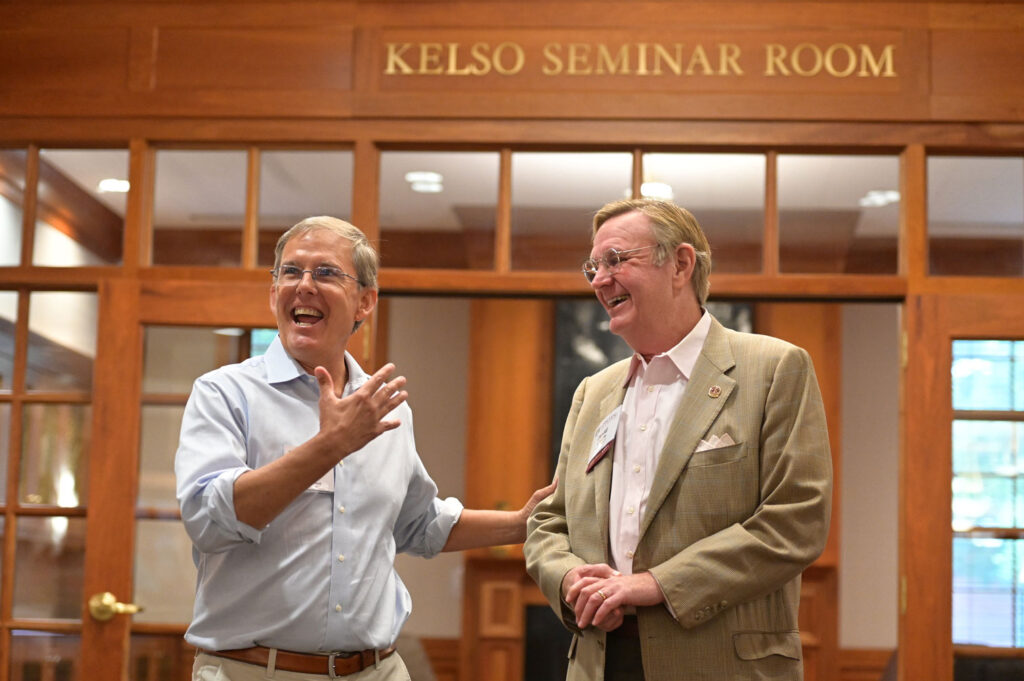 In June, David Kelso ’70 P’07 celebrated his fiftieth reunion with his former classmates. Over the fun-filled weekend, many gathered in March Library to celebrate the official dedication of the Kelso Family Seminar Room, a beautifully designed gathering space for students and faculty that was built in 2010 when the library underwent a significant renovation.

In his opening remarks, Head of School Charley Stillwell spoke of the Kelso family’s longtime commitment to philanthropy and volunteerism at EHS. Kelso served on the Board of Trustees from 2002-2008; has often advised the School in artwork placed around campus; and generously funded The Kelso Family Award, which has honored the Senior Warden of the Vestry for the last twenty years. “Leadership takes a lot of different shapes and forms, and it’s been really fascinating for me to learn about the impact David has had here over a long period of time,” Stillwell mused. (“And some of it good,” quipped Kelso.)

Kelso reflected on the “culture and the value system and the strength of this place,” as he spoke to the crowd. According to the alumnus, “you can’t manufacture that.” The library was full of former classmates from the Class of ’70, friends of his daughter’s from the Class of ’07, and current faculty members who have directly benefited from the Kelso family’s generosity, showing the bonds of Episcopal run deep.

On why he continues to support The High School in myriad ways, year after year, Kelso said: “We really do need to turn out graduates who have strong moral compasses and a strong sense of who they are and what their values are. And I think that is absolutely worth supporting and preserving.”

Since it was built in 2010, the Kelso Family Seminar Room has been a sought-after spot for students and teachers alike. Seniors often reserve the room to participate in virtual college interviews; teachers conduct meetings with families over Family Weekends; and students gather in it during busy days to relax with friends. With a fireplace, cozy chairs, and a living-room feel, “it lends itself to a more casual, homey spot for students who need to rest, recharge, or focus in a beautiful setting,” said Anna Collins, director of March Library. The room also houses the library’s collection of books written by EHS alumni and a piece of art by longtime photography teacher David Douglas.

In Kelso’s senior yearbook, his peers wrote: “Dave’s accomplishments have not gone to his head; he sacrifices his own welfare and considerations for what is the best course for his peers.” Fifty-two years after that yearbook was published, those sentiments still ring true.